Before we begin…it’s been a while since we last talked! Learn more here about the reason for this delay and the exciting new features in the works. Thanks for your continued interest and support of the platform. Some of the best content I’ve ever produced is on the horizon. Stay tuned!

There are few topics labeled with more inspirational quotes than work:

And for every quote that could go on a poster bearing a waterfall and rainbow, there is a sensible counterpart:

Thanks for that one, Fred.

These dizzying contradictions build up the numerous (and obviously varied) public perceptions surrounding work. They are enough to make any person question the utility and worth of pursing their passions. Dennis Rockhill certainly did.

He recounts the many times he contemplated changing paths but convinced himself not to.  When he wanted to change majors from graphic design to engineering in college, he felt too invested in his current path to do so. As he progressed up the career ladder, he convinced himself to stay the course in order to build up more experience.

He decided to leave his stable position as the director of product development at a strategic design firm and open Proto Green Bay, a youth-focused makerspace.

Dennis’ story is the first we will be reviewing in a new series called “Reality Check.” In this collection, we will be hearing from people who took leaps to pursue their passions, even if it meant leaving a sturdy job to do so. These innovators and risk takers are some of the most inspiring people I’ve met because they are in the thick of trying to make things work. They choose difficult paths in the search for a more fulfilling career or a better chance of making positive change in their community. And they have some of the best and most realistic advice as a result.

Watch my video feature on Dennis:

This discussion of work, identity, and fulfillment is a complex one, and often intersects with other social factors. Pew Research reports that 30% of Americans view their job as just a means to get by, and not an essential piece of their identity or career aspirations. This sense of job satisfaction is tied to income, with 59% of individuals making more than $75,000/year reporting they are satisfied with their job, and only 39% of individuals making less than $30,000 saying the same.

We find Dennis in the midst of juggling these factors, considering financial stability, personal fulfillment, supporting his family, and enhancing his community. He was aware of the growing presence of makerspaces, and waited for someone to establish one in Green Bay. With a large presence on the east and west coast and growing prominence in the midwest, makerspaces provide a place for individuals to collaborate and share tools and expertise on a variety of creative or technical projects.

“The concept of makerspaces was becoming a little better known, and we were all kind of wondering when we would have one in Green Bay. After a long enough time thinking about that, I just thought ‘Someone has to do this. Why not myself?’”

And just like that, Dennis left his full-time job and worked to realize his vision of establishing a creative and collaborative place for youth in the community. 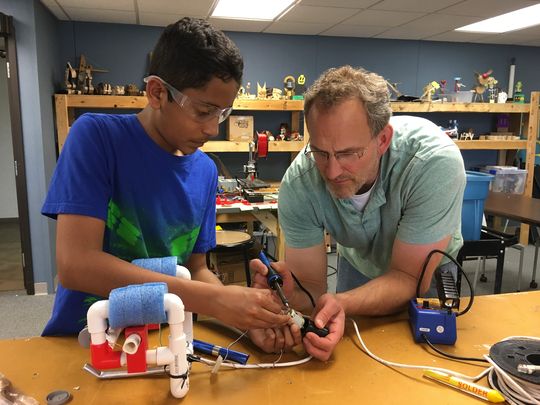 As makerspaces are more commonly accepted on the coasts, I wondered if Dennis had any problem convincing the community of the utility of such an establishment. He comments that the risk-averse mindset in the Northeastern Wisconsin did present some impediments to Proto’s growth. He also acknowledges how people often nominally stress the need to consider the process of creating and learning through making mistakes, but when a business is entirely dedicated to this, such as a makerspace is, it can be difficult to get people on board.  “When people talk about life being a journey, we all smile and nod along to it and then we get back to work and ignore it,” he says.  Due to the fixation on having a tangible end product, society can sometimes devalue the importance of problem solving in the process.

Along with the difficulties of convincing some community members of Proto’s importance, Dennis has encountered periods where he feels burnt out, especially since building this business became an integral and consuming part of his identity, and not just a job. In fact, Dennis shares how just a few days before the interview he was feeling pretty exhausted with his work. However, there is always something that happens to push him through those times.

“It almost hasn’t failed yet that just when you’re feeling extremely run down or on the low end of the enthusiasm spectrum, something happens that changes your mindset. Just last week, I was feeling like I’d hit the bottom of the barrel. By the end of the next day, I was feeling like I was riding on cloud nine. Something great always happens.”

Whether it’s seeing a child work through a difficult project or hearing from parents about how much Proto has changed their son’s or daughters’ life, Dennis is fueled by these small yet significant moments.

Of course, after pursuing one’s dream job, it is not going to be thrilling and inspiring every day. There are still days where Dennis has to clean the space, keep the books, and do all the menial tasks that business owners do. However, just as he encourages students to do in his makerspace, Dennis reminds himself of the importance of the process.

“There’s the everyday stuff you have to maintain. But if overall you have a focus on that process, that stuff doesn’t seem to be as monotonous.”

Looking back on how he was grown from a college graduate very focused on financial stability to the person who opened Proto, Dennis explains how his definition of success has changed:

With his realistic outlook and tenacity, Dennis has realized his dream of making Proto a resource for schools. He has joined forces with the Einstein Project and continues to be an advocate for STEM education in Green Bay area schools. It hasn’t been an easy path, but through taking the leap he always talked himself out of, he has established an invaluable resource in the town of Green Bay.

Now that’s something you can slap on a motivational poster.